Subject Sports; Football Description Phil Shaw finds The Guv’nor with one eye on management and the other on tomorrow’s FA Cup tie at Highbury. Another day, another powder-keg confrontation for Paul Ince. For a few seconds last Saturday the former England captain looked set to throttle Dennis Wise. […]

Subject Sports; Football Description Paul Ince has accused a section of Millwall fans of racially abusing his Wolves team-mate Seol Ki-Hyeon. The former England midfielder claimed the South Korean World Cup star was subjected to a barrage of taunts at the New Den on Saturday. Seol scored a […]

Subject News Description Within the confines of the refugee centre where Luol Deng’s family camped out in Egypt, football and basketball were as much a part of the daily routine as the wait for news of the civil strife which was ripping apart their native Sudan.The uncertain reality […] 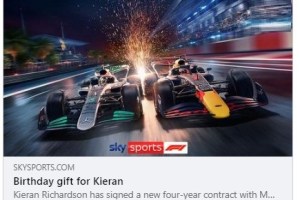 Subject Sports; Football Description Kieran Richardson has signed a new four-year contract with Manchester United. The England international has been rewarded by manager Sir Alex Ferguson after breaking into United’s starting line-up this season. Richardson, who spent the second half of last term on loan at West Brom, […]

Subject Sports; Football Description Jerry Rice retired after an amazing 20 seasons in the National Football League. His staggering career receiving totals outdistanced any receiver ever to have stepped onto the field.Perhaps one of the most coveted records Rice owns is the mark for career receptions.Rice supplanted former […]

George Foreman: Faith From the Fist

Subject Sports; Boxing Description You may know him as the oldest person to ever capture a heavyweight boxing title. Or you may know him by his famous cooking gadget that reduces the amount of fat in your meat products. Regardless, George Foremans name goes beyond the kitchen and […]