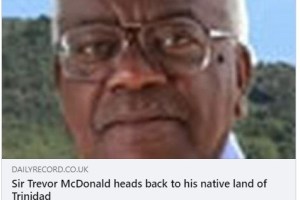 Sir Trevor McDonald heads back to his native land of Trinidad

Subject Celebrity Description Sir Trevor McDonald laughs as Trinidad’s revellers flood the streets and a bikini-clad beauty bends low and shakes her booty to the music, pushing saucily against him so that he really feels the rhythm. The suggestive scene from the first episode of The Secret Caribbean […]

Transfer Toss: Ashley Young to Barcelona for Â£25m? No Chance…

Subject Sports; Football Description The enforced loss of Martin Laursen was regrettable. The same goes for the departure of Gareth Barry. But the loss of Ashley Young (who you voted overwhelmingly as Villa’s most indispensable player) would be nothing short of disastrous for Martin O’Neill and co. Marca, […]

Subject Sports; Football Description John Barnes has been confirmed as manager of Coca-Cola League One outfit Tranmere. The former England and Liverpool winger, who recently ended his short stint as head coach of Jamaica, has been out of club management since being sacked by Celtic in February 2000. […]

Subject News Description Yanic Truesdale is a Canadian actor best known for his portrayal of Michel Gerard in the TV series Gilmore Girls, which I can safely say I’ve never watched. I have watched Gabby Agbonlahor though, scampering down the wing as fast as his little legs will […]