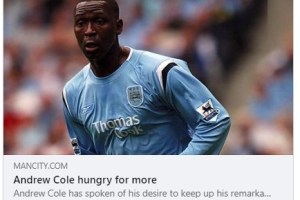 Subject Sports; Football Description Andrew Cole has spoken of his desire to keep up his remarkable Premiership goalscoring record at Manchester City. Cole’s consistency has seen him become the second highest scorer in the history of the Premiership, and he took only 24 minutes to open his account […] 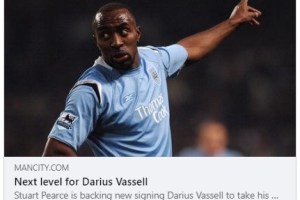 Next Level For Darius Vassell

Subject Sports; Football Description Stuart Pearce is backing new signing Darius Vassell to take his career up another level, and he feels that a possible place in the England squad should they qualify for next year’s World Cup is well within the striker’s reach. Capped 22 times by […]

Subject Sports; Football Description Chelsea winger Damien Duff hopes the arrival of Shaun Wright-Phillips will inspire the Blues to Champions League glory. Wright-Phillips made his Chelsea debut in a friendly against AC Milan on Sunday and gave a performance which suggests the #21m signing from Manchester City can […]

Subject Scholarly Articles Description Lightning quick over 10 yards and with a cannon shot, winger Shaun Wright-Phillips will have to adapt his game to fit in at his new club, champions Chelsea. Wright-Phillips, the step-son of former Arsenal and England striker Ian Wright, made his international debut 11 […]

Subject Sports; Football Description Shaun Wright-Phillips finally agreed to join Chelsea yesterday after the Premiership champions settled on a £21m fee and Manchester City entered the transfer market immediately with the acquisition of the Fulham striker Andy Cole on a one-year deal. While City are understood to be […]

Barkley was chairman of the boards

Subject News Description Feb. 10, 1991 – Few people dared to get in the path of Karl Malone when the 6-foot-9, 260-pound Utah forward barreled to the basket. Charles Barkley, playing for the East squad, took the dare in the opening minutes of the NBA All-Star Game in […]