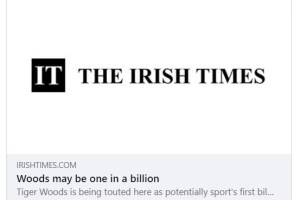 Woods may be one in a billion

Subject Golf Description Tiger Woods is being touted here as potentially sport’s first billionaire. This is the main element of a report in the current issue of Golfweek magazine, which estimates Woods’s worldwide earnings last year at $15 million, including overseas appearance fees of $3 million. Significant endorsement […] 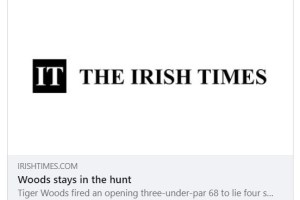 Woods stays in the hunt

Subject Golf Description Tiger Woods fired an opening three-under-par 68 to lie four shots off the pace during the first round of the Nissan Open at the Riviera Club yesterday. Little known JP Hayes was one shot clear of another surprise, Robin Freeman, after a 64. Creator DAVID […]

Shaq fulfills promise of getting his LSU degree

Subject Sports; Basketball Description EL SEGUNDO, Calif. — Shaquille O’Neal has earned a new nickname — The Big Graduate. The Los Angeles Lakers’ star will receive his diploma at Louisiana State University on Friday, causing him to miss the game that night against the Vancouver Grizzlies in Staples […]

Subject Sports; Football Description THE father of England footballer Emile Heskey was hailed a hero yesterday after tackling a gunman fleeing a robbery. Tyrone Heskey confronted the raider even after he cocked his pistol and aimed at him – then risked his life to chase the raider through […] 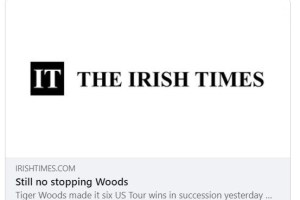 Subject Golf Description Tiger Woods made it six US Tour wins in succession yesterday at the AT&T Pro-Am at Pebble Beach in California, equalling Ben Hogan’s six-in-a-row from 1948. Woods started the day on seven under par after three rounds at the Monterey Peninsula course. Creator irishtimes.com Source […]