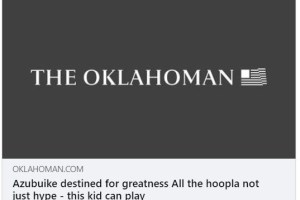 Subject Sports; Basketball Description TULSA – No matter what the defense tried, it didn’t work. One defender, two defenders, three defenders – it didn’t matter how many were sent to stop the little boy. Seven-year-old Kelenna Azubuike just kept dashing by them, dribbling around them and relentlessly firing […] 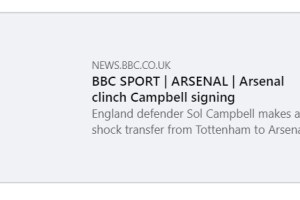 Subject Sports; Football Description Former Tottenham defender Sol Campbell has ended months of speculation by signing a four-year contract with rivals Arsenal. Although he was linked with some of Europe’s leading clubs, Campbell decided to remain in England to boost his international prospects. Creator news.bbc.co.uk Source http://news.bbc.co.uk/sport2/hi/football/teams/a/arsenal/1420259.stm Publisher […] 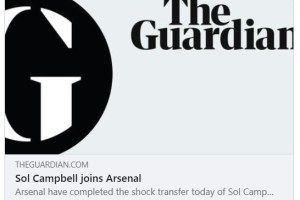 Subject Sports; Football Description Arsenal have completed the shock transfer today of Sol Campbell from arch-rivals Tottenham on a free transfer. The England defender, who has signed a four-year contract with the Gunners, was unveiled at a midday news conference which journalists presumed had been called to announce […]