The Tuesday Podcast: The Billionaire And The Tire Repairman

Subject Interviews Description Wayne Disowney runs a tire repair shop in Kingston, Jamaica. He took scrap parts from an old Lincoln and turned them into a machine that retreads tires. It works great. His shop is a shack. He’s totally outside the formal economy. If he wanted to […]

World Cup 2010: Rio Ferdinand vows ‘I will not cry over spilt milk’

Ricky Whittle is rear of the year

Subject Media Description ACTOR Ricky Whittle has been crowned a winner in the Rear of the Year awards. The annual competition determines which male and female celebrity possesses the most delectable derriere. Whittle, 28 and from Billinge, who until recently played love rat Calvin Valentine in Channel 4 […]

The New Face of Hip-Hop

Subject Music Description IN March the young hip-hop star Drake was in town for a harried few days, polishing up the final details on his debut album, “Thank Me Later,” and filming the video for the first single, “Over,” before heading out on his first proper headlining tour. […] 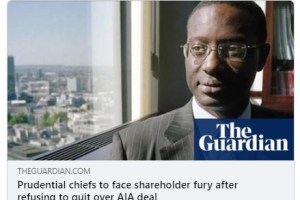 Subject Business Description Shareholders in Prudential have criticised the insurer’s chairman and chief executive for showing “high-handed arrogance” in their refusal to step down after the collapse of the planned takeover of the Asian life insurance division of AIG. The embattled top management of Prudential today came out […]