Subject Sports; Golf Description How would the scoring of an average club golfer compare with that of Tiger Woods, winner of a record-equalling three major professional championships this year? The conundrum was presented to an American mathematics professor, who did his calculations on Woods from 10 successive tournament […] 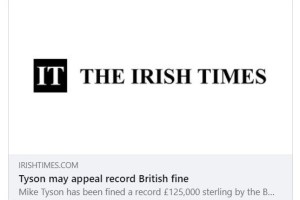 Subject Sports; Boxing Description Mike Tyson has been fined a record £125,000 sterling by the British Boxing Board of Control (BBBC) – but he will be allowed to fight again in Britain. The former undisputed world heavyweight champion was found guilty of misconduct after continuing to swing punches […] 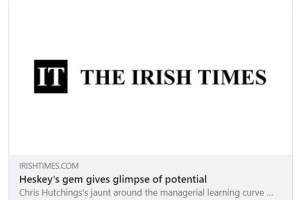 Subject Sports; Football Description Chris Hutchings’s jaunt around the managerial learning curve will, no doubt, be swift and torturous and yet even if the journey’s end should ultimately come to represent nothing more edifying than a handsome severance cheque it does seem probable he will quite enjoy the […] 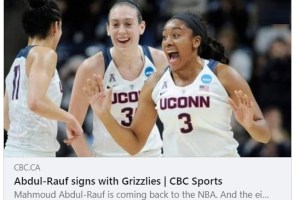 Subject Sports; Basketball Description Mahmoud Abdul-Rauf is coming back to the NBA. And the eight-year veteran of the league will be making his return in a Vancouver Grizzlies uniform. “I’m extremely excited about adding to our guard core, a player of Mahmoud’s accomplishments,” said Dick Versace, the Grizzlies’ […] 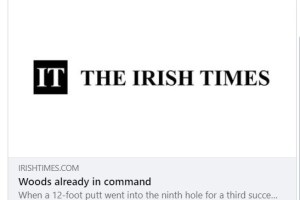 Subject Golf Description When a 12-foot putt went into the ninth hole for a third successive birdie, the IMG official turned around and remarked with a quiet smile: “OK boys. That’s it.” Tiger Woods still had 63 holes to play in the 82nd USPGA Championship here at Valhalla, […]

Subject Sports; Golf Description On a hot Sunday afternoon last May, Tiger Woods conducted a golf exhibition in Oklahoma City. During the hour before he appeared, while a large crowd baked in the bleachers, a member of his entourage held a trivia contest, with T-shirts for prizes. One […] 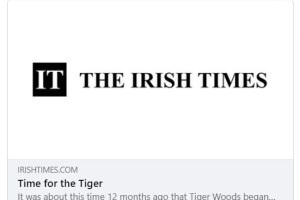 Time for the Tiger

Subject Sports; Golf Description It was about this time 12 months ago that Tiger Woods began what has since become a stunning dominance of tournament golf. As far as would-be rivals were concerned, fallibility ended on August 22nd 1999, when victory in the USPGA Championship was followed by […] 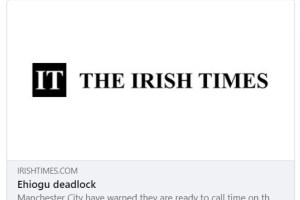 Subject Sports; Football Description Manchester City have warned they are ready to call time on their attempts to prise Ugo Ehiogu away from Aston Villa. City have almost run out of patience with Villa because of their reluctance to lower their asking price for Ehiogu. Creator irishtimes.com Source […]