The one who got away: David Lammy and his expenses

Subject Politics Description London MP, with a constituency only 28 minutes away by Tube from Parliament, claims £12,041 for a second home. Sounds a straight-forward case in the long line of London MPs who had their expense claims widely publicised and heavily criticised during earlier this year? Except […]

Subject Motor Racing Description Formula 1 driver Lewis Hamilton chalked up his second victory of the F1 season by coming out victorious at the Singtel Singapore Grand Prix this last weekend. This slide show video presents the glorious sights of this exciting race. The 2009 Formula 1 SingTel […]

Morecambe not wise for Sol

Subject News Description When Sol Campbell signed for Notts County, I found it hard to take it seriously. A player who had played at the very highest level of the game for the best part of two decades plying his trade in the bottom tier of English football. […] 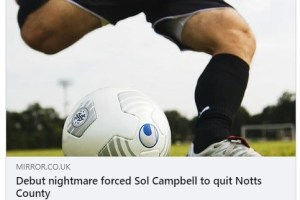 Subject Sports; Football Description Sol Campbell hated his Notts County debut at Morecambe so much it prompted the former England star to quit after just one game. Defender Campbell, 35, had his lucrative five-year contract with the League Two club terminated yesterday by mutual consent. But the star […] 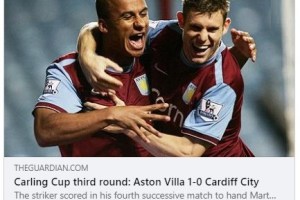 Subject Sports; Football Description On a night when Nigel Reo-Coker was a notable absentee from the Aston Villa squad, Gabriel Agbonlahor continued his impressive form to score for the fourth successive match to spare Martin O’Neill the embarrassment of another early exit in the Carling Cup. Villa had […] 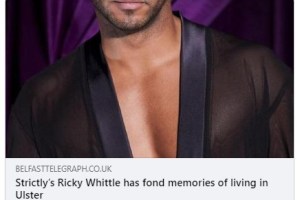 Strictly’s Ricky Whittle has fond memories of living in Ulster 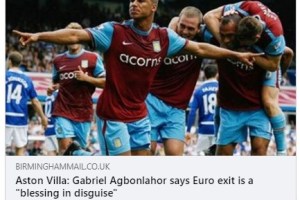 Subject Sports; Football Description Gabriel Agbonlahor believes Aston Villa’s early European exit could prove “a blessing in disguise” and allow Martin O’Neill’s side to push for a Champions League place. The England striker was as disappointed as his team-mates when Villa failed to reach the group stages of […] 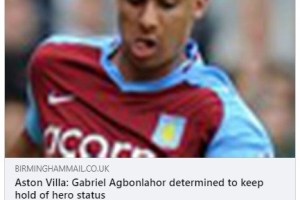 Subject Sports; Football Description GABBY Agbonlahor is desperate to keep the claret and blue faithful on his side after reclaiming hero status with two goals in two games. The Villa striker followed his first goal of the season against Fulham with his second successive derby winner at Blues […]

Subject Motor Racing Description Lewis Hamilton, the Formula One world champion, launched the McLaren team’s new partnership with Marks & Spencer by driving one of the team’s cars into the retailer’s Marble Arch store. The partnership sees the Vodafone McLaren Mercedes team partner with M&S to create a […]

Subject Sports; Football Description Ian Wright has hit back at claims that his South African academy is ‘raping’ the country of its best talent. But the Arsenal legend has also insisted that it is not a problem if profits are made from the project. Sportsmail revealed that Wright […]