Will Smith came up with concept for ‘Men In Black 3’

Subject Entertainment Description Will Smith reprises his role as alien fighting Agent J in the third installment of the popular movie franchise and director Barry Sonnenfeld revealed Will came up with the idea himself, which sees him travel back in time to rescue his partner (played by Tommy […] 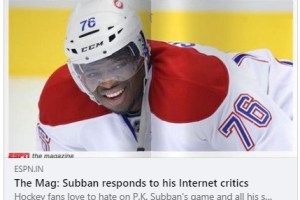 The Mag: Subban responds to his Internet critics

Subject News; Sports; Hockey Description less than two seasons to establish himself as one of the NHL’s most exciting — and controversial — young stars. The 22-year-old Canadiens defenseman has antagonized opponents with flashy puck skills, devastating checks and endless trash-talk, all with a grin. But while Montreal […]

Adrian Lester: Hustle demise is no ‘end of an era’

Subject News; Articles; Celebrity Description Adrian Lester says he’s not upset about his TV show Hustle coming to an end. The actor, who plays chief grifter Mickey Stone, said he only agreed to appear in the eighth series when he found out it would be the last. “My […]

Subject News; Articles; Entertainment Description Adrian Lester has admitted he isn’t upset about his TV show Hustle coming to an end. The actor, who plays chief grifter Mickey Stone, said he only agreed to appear in the eighth series when he found out it would be the last. […]

Subject Sports; Hockey; News Description TSN: RDS is reporting the Canadiens have offered P.K. Subban a 2 year deal worth $5.5 million, but both sides are far apart as Subban is looking for a longer deal. Subban’s agent, Mark Guy told TVA Sports, “I don’t see anything being […]

Subject Research Description Studying African American males who “made it” to college, Penn scholar seeks to understand why and to get campus leaders and researchers to focus on success rather than just failure. Creator Doug Lederman Source https://www.insidehighered.com/news/2012/02/06/study-aims-learn-why-some-black-men-succeed-college Publisher insidehighered.com File

Subject Higher Education Description The litany of bad news about the status of black men in higher education is by now familiar. They make up barely 4 percent of all undergraduate students, the same proportion as in 1976. They come into college less prepared than their peers for […]