David Lammy: ‘The battle against poverty of ambition’

Subject Articles; Scholarly Articles Description Someone once said that equality is the heart of democracy. They were right. And from that recognition flows my conviction that, just as racism is deplorable in any democracy, so are poverty, deprivation, poor education, poor housing and unemployment. Creator independent.co.uk Source https://www.independent.co.uk/voices/commentators/david-lammy-the-battle-against-poverty-of-ambition-33673.html […] 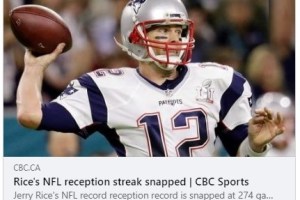 Subject Sports; Football Description Oakland Raiders wide receiver Jerry Rice failed to catch a pass in his club’s 13-10 victory over the Buffalo Bills Sunday, ending his NFL record streak of 274 straight games with a reception. Rice last went without a catch on Dec. 1, 1985 as […]

Subject Sports; Baseball Description Kobe Bryant’s days in a Colorado court seem to be over. With the sexual assault charge against him being dropped this week, Bryant faces only a civil lawsuit from his alleged victim. But that suit will most likely be dropped after Bryant and his […] 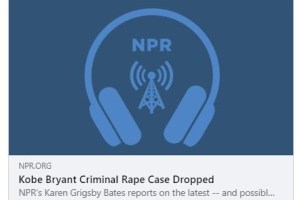 Subject Sports; Baseball Description NPR’s Karen Grigsby Bates reports on the latest — and possibly, the final twist — in the Kobe Bryant criminal rape case in Colorado. The case against the Lakers basketball superstar was dropped Wednesday after Bryant’s accuser decided not to pursue the case. Creator […]