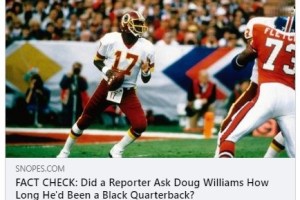 Did a Reporter Ask Doug Williams How Long He’d Been a Black Quarterback?

Subject Sports; Football Description “Doug, are you upset about all the questions about your being the first black quarterback in the Super Bowl?” Creator David Mikkelson Source Publisher snopes.com File 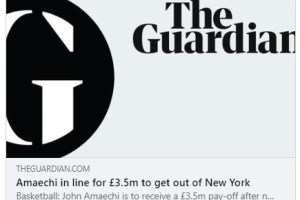 Amaechi in line for £3.5m to get out of New York

Subject Sports Description John Amaechi is to receive a £3.5m pay-off after not playing all season. His NBA career may be over at the age of 33. The New York Knicks acquired Amaechi on Tuesday in a trade with the Houston Rockets but they see the former England […] 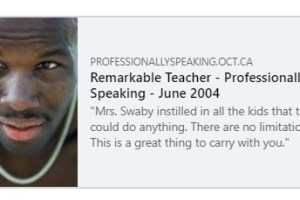 Subject College athletics Description When Donovan Bailey sits in the TV booth high above the Olympic Stadium in Athens, his Grade 1 teacher, Carmen Swaby, won’t be uppermost in his mind. But she’ll be present nonetheless. Donovan Bailey was born in Jamaica in 1967 and came to Canada […] 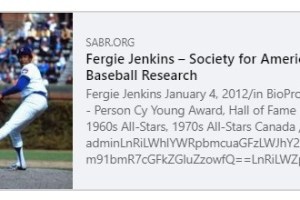 Subject Sports; Baseball Description Ferguson Arthur Jenkins, Jr. was a dominant right-handed pitcher known for strikeouts, eleventh (through 2013) on the all-time leader list with 3,192. He is the only pitcher to have more than 3,000 strikeouts with less than 1,000 walks (997). While he pitched for the […]

Subject Politics; Politics and Government Description I am delighted to be here this morning. Looking through the list of participants, I would like to say how wonderful it is, because it conveys how far we have travelled on the agenda of equality and human rights. I am humbled […]

Subject Artists Description On the eve of its 40th anniversary, former presenter Andi Peters tookover the helm of the world’s longest-running music show. Andi had previously produced T4 for Channel 4 plus a number of documentaries for TV. We caught up with him at the beginning of February […]

Subject Sports; Baseball Description With 755 career home runs, Hank Aaron broke Babe Ruth’s record by more than 40 home runs. The last Negro League player to enter the Majors, Aaron joined the Milwaukee Braves in 1954, and moved with them to Atlanta in 1966. By 1969, his […] 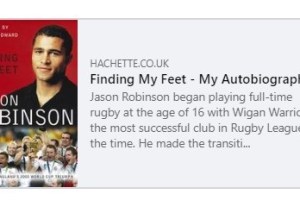 Finding My Feet – My Autobiography

Subject Books Description Jason Robinson began playing full-time rugby at the age of 16 with Wigan Warriors, the most successful club in Rugby League at the time. He made the transition to Rugby Union with Sale Sharks in 2000 and was fast-tracked to the England squad. His speed, […]

Subject Sports; Basketball Description Bill Russell re-imagined basketball, bringing an exciting new level of play to the game. His analytical defensive style consisted of more than rebounding: he blocked shots and altered the plays of his opponents. During his playing career as center for the Boston Celtics, the […]