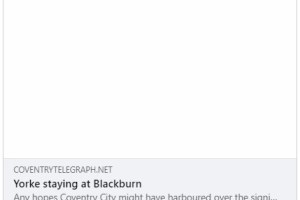 Subject Sports; Football Description Any hopes Coventry City might have harboured over the signing of striker Dwight Yorke have now almost certainly disappeared. Graeme Souness has told Yorke that he still has an important role at Blackburn and has challenged him to be a role model for young […] 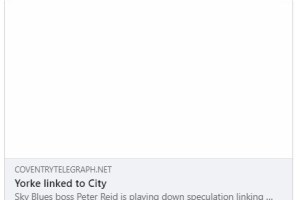 Subject Sports; Football Description Sky Blues boss Peter Reid is playing down speculation linking him with a bid for Blackburn Rovers striker Dwight Yorke. Reid admits he made an enquiry for the former Manchester United man a month ago but was put off by the player’s £30,000-a-week wage […]

Back to the real world

Subject Media; Social Media Description Looking at Sir Trevor McDonald’s brilliantly polished shoes, it’s not easy to imagine him getting them muddy in the frontline trenches of journalism. But getting his shoes “dirty” is exactly what the 64-year-old newscaster is proposing to do when he moves on from […]

Subject News Description He’s young—only 19 years old—and he left school early—just one season at Duke—and he has loads of talent. But that is about where the comparisons end. Selected with the seventh pick in NBA Draft 2004, Deng comes to the Bulls with more life experiences than […]