Subject News Description Tiger Woods has already established himself as arguably the greatest golfer in history, but he fervently hopes his legacy will focus instead on his contributions to society. He created the Tiger Woods Foundation with his father Earl shortly after turning professional in 1996, paving the […]

Subject Sports; Rugby Description Ellery Hanley, rugby league’s greatest player of the modern age, will make an eagerly-anticipated return to the sport tomorrow when he is unveiled as the new coach of Doncaster. The South Yorkshire club, relegated to National League Two this year after breaking the league’s […]

Legend Ellery back in the game

Subject Sports; Rugby Description ELLERY HANLEY has left the comfort zone to take on the biggest challenge of a legendary career. One of the game’s greatest players was yesterday given a three-year contract to turn lowly Doncaster into a side fit to take their place alongside the rugby […] 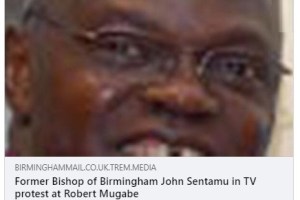 Subject News Description SUPPORT came in today for the Archbishop of York who cut up his dog collar on live television in a dramatic protest against Robert Mugabe’s rule. Former Bishop of Birmingham John Sentamu pledged that he would not wear the symbol of his office again until […]

Subject Sports Description The emergence of Gabriel “Gabby” Agbonlahor began last season and has continued in superb fashion this year. Agbonlahor—born Oct. 13, 1986 in Birmingham—is a fine product of the Villa Youth Team that also produced England international Darius Vassell. In recent seasons, the hype surrounding that […]

Subject News Description In the past, political parties would lament that there wasn’t a vast pool of black talent. Now the pool is overflowing, from grass-roots activism to the mainstream parties. But there’s still a way to go. Both activist and party bosses are in danger of believing […] 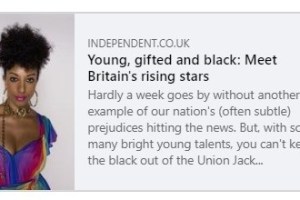 Subject News Description Hardly a week goes by without another example of our nation’s (often subtle) prejudices hitting the news. But, with so many bright young talents, you can’t keep the black out of the Union Jack. Not a day goes by when I am not asked by […] 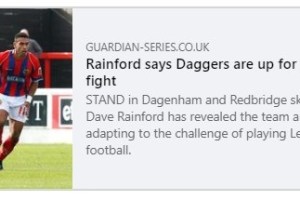 Rainford says Daggers are up for the fight

Subject Sports; Football Description STAND in Dagenham and Redbridge skipper Dave Rainford has revealed the team are still adapting to the challenge of playing League football. Daggers were tipped for a swashbuckling first season in League Two following an impressive promotional campaign from the Conference. But the reality […]

Subject News; Sports; Football Description Former football star Ian Wright is to be investigated by police over an allegation of racism. The black former Arsenal and England striker is accused of directing a tirade of racist abuse at a black traffic warden during an argument over a parking […]

Subject Interviews Description When we at Diversity In Law were looking for the ideal person to talk to about ethnic minority students in the profession, we realised we’d be hard pushed to find someone better qualified than David Lammy. He’s currently the MP for Tottenham and Minister for […]